Vancouver, British Columbia--(Newsfile Corp. - November 10, 2021) - Kuya Silver Corporation (CSE: KUYA) (OTCQB: KUYAF) (FSE: 6MR1) (the "Company" or "Kuya") is pleased to announce that it has commenced a 2,000+ m drill program at the Silver Kings Joint Venture ("Silver Kings JV"), which is part of the Company's larger Silver Kings Project, located in the historical Cobalt silver mining camp in Northeastern Ontario. This drill program is designed to test for high-grade silver-cobalt veins at depth based on 2021 field mapping and portable XRF (pXRF) analyses, soil sampling, and LiDAR lineament analysis, taking into consideration historical work and data. The drilling is fully permitted and is being planned to intercept target structures, along plunge of mineralization, within 100 vertical meters of the Nipissing Diabase contacts in the historically named Productive Zone. Kuya has an option to acquire a 70% interest in the holdings of Electra Battery Materials Corporation ("Electra", formerly known as First Cobalt Corp.) in the joint venture area, as previously announced (see Kuya press releases dated March 1, 2021, and September 2, 2021).

Drill targets for this program are focused primarily on the newly identified Oxbow area, associated with the historic Silver Centre mining camp. The Oxbow area is a relatively untested zone that is interpreted by Kuya to be the southern continuation of the mineralizing system from the mines at Silver Centre area, which produced more than 23 million ounces of silver from several historic mines including Keeley and Frontier between 1908 and 1965 (see Figure 1). 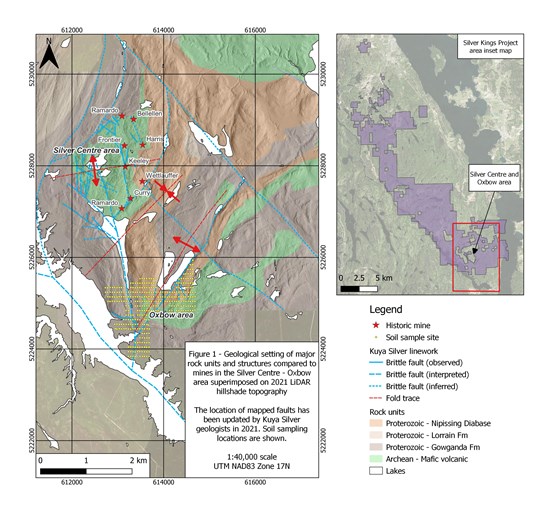 David Lewis, Exploration Director, commented, "The major controls on silver-cobalt mineralization in the Cobalt and Silver Centre mining camps are 1) proximity to the upper and lower contacts of the Nipissing Diabase sill, in particular near flexures or folds in the sill, and 2) proximity to major structures, especially faults. At Silver Centre, the majority of mining and exploration was focused above the diabase; in contrast, in the main Cobalt mining camp to the north, including at Kuya's 100%-owned Kerr Project, the bulk of economic mining was from below the diabase. We see a major opportunity to test below the diabase contacts near Silver Centre in this drill program."

Mr. Lewis continued, "Our drill targets in this program are based on a combination of geological mapping, geochemistry, and geophysics, supported by limited historical drilling results. We are especially excited by the Oxbow area, where an untested major fold in the diabase appears to be cut by the same branching fault systems that hosts the significant mineralization from the Silver Centre veins (see Figure 1), and where we have the potential for a major new buried silver discovery."

David Stein, President and CEO, remarked, "Based on Kuya's work on the joint venture to date, we have identified the Oxbow target area as a priority for the potential discovery of multiple or clusters of high-grade silver veins. Our target is the potential for buried mineralization that was missed during the previous mining campaigns over the past 120 years."

The Silver Centre mining camp produced approximately 23 million ounces of silver from four major mines: the Keeley (12.1 Moz Ag), Frontier (7.0 Moz Ag), Wettlauffer (2.6 Moz Ag), and Ramardo (also known as Trout-Lorrain; 1.1 Moz Ag) mines, as well as the smaller Forneri, Harris, Curry and Bellellen mines. The production was largely from branching, mineralized faults that overlie an arched Nipissing Diabase sill, within a 100 m vertical envelope (historically referred to as the Productive Zone) which is located above, and extends slightly into, the diabase contact. Limited mining below the diabase at the Keeley Mine (400,000 oz Ag or about 3.3% of historical production) shows both that there is further potential for mineralization and suggests a second, essentially untested, Productive Zone beneath the diabase.

The Oxbow area is located 3 km south of the Silver Centre area, where a pronounced arch or fold in the Nipissing Diabase is cut by faults. These faults include the north-trending Tooth Lake Fault, which continues north towards Silver Centre and branches to host the Keeley-Frontier, Ramardo and Wettlauffer mines, and a newly recognized northeast-trending fault that is parallel to the mineralized Wettlauffer structure. Limited historical drilling on the Silver Kings JV property near Oxbow has focused above the diabase and encountered minor but significant silver-cobalt interceptions (up to 1.8 oz/ton silver [Hole 65-3, Tower Silver Mines Ltd., 1965] and descriptions of up to 5/8" massive cobalt-bearing veins with low-grade cobalt haloes up to 7'6" along core [Hole 53-7, Ox-bow Silver Mines, Ltd., 1953], intercepted above the interpreted Productive Zone, with no known drilling beneath the diabase.

Work by Kuya's crews (see Figure 2) recognized the presence of both north and northeast trending faults adjacent to, and cutting, the arched Nipissing Diabase sill near Oxbow Lake. A 335 sample (plus QA/QC samples) B-horizon soils grid across the area demonstrated that elements linked to the silver-cobalt-arsenide veins of interest are locally elevated from 5:1 up to 60:1 relative to median background values and form elongate, overlapping clusters near faults and fold hinges. Portable XRF analyses on unmineralized rock relative to suspected mineralized fault planes yielded similar ratios compared to background values. A structural analysis of the area suggested that the lower diabase contact may be the better exploration target and drill holes have been planned to target these areas at depth. 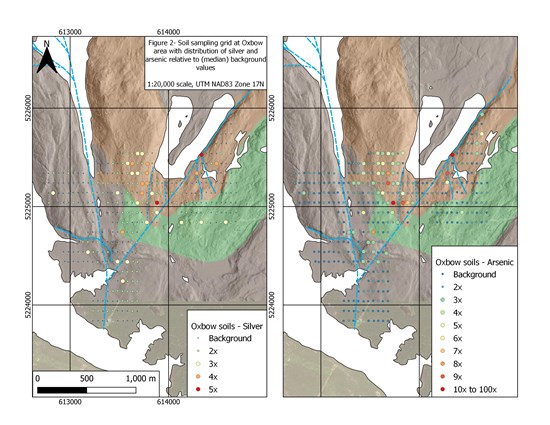 Soil samples were collected by hand auger, sealed in marked sample bags and dried prior to analysis. Blanks, duplicates and certified standards were regularly inserted as part of an industry-standard QA/QC protocol. Samples were delivered to ALS Laboratories in Sudbury, Ontario, where they were processed and assayed. Samples were dried (if required), fully dissolved by 4-acid digest, and assayed by ICP-MS.

Portable XRF analyses were done using a handheld Nitron XL3t, which was professionally serviced and calibrated in 2021. Field calibration of the portable XRF is done daily and on a regular basis during use using reference standard RCRApp.

The technical content of this news release has been reviewed and approved by Mr. David Lewis, P.Geo., Exploration Director of Kuya and a Qualified Person as defined by National Instrument 43-101.

Kuya Silver is a Canadian‐based mineral exploration and development company with a focus on acquiring, exploring, and advancing precious metals assets in Peru and Canada.

Kuya Silver Corporation
Telephone: (604) 398‐4493
This email address is being protected from spambots. You need JavaScript enabled to view it.
www.kuyasilver.com

Neither the Canadian Securities Exchange nor the Investment Industry Regulatory Organization of Canada accepts responsibility for the adequacy or accuracy of this release.

To view the source version of this press release, please visit https://www.newsfilecorp.com/release/102725